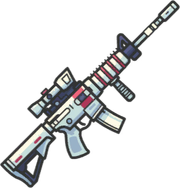 The Scoped M4 is one of the weapons in ZombsRoyale.io, and can only be found in golden chests. It only spawns as a Mythic.

The Scoped M4 is a sniper-like AR that has a long firing range. It has an increased FOV that is larger than that of a normal weapon, but less than that of a Sniper Rifle (except for the VSS).is2ksijojoiodiowjdo2iwo